Card tricks are my passion. I have made my living for over 20 years performing magic tricks with cards. I have learned what works. Here you will learn some awesome card tricks:

These card tricks are easy to do and will fool and amaze your audiences. You will learn step by step details on how to perform each of these magic tricks with cards.

EFFECT: Deck is shuffled. Two cards are picked, one is taken out of the deck, the other is thought of. Your spectators switch the places of the two cards in the deck while you aren’t looking. You tell both spectators their cards.

Hand the deck out to be shuffled. You need to get a key card. A key card is when you know the bottom card. There are a few ways to do this. Many times after having the cards shuffled, your spectator will flash the bottom card as they hand back the deck. If they don’t, I like to use the All Around Square Up.

ALL AROUND SQUARE UP: You must peek the bottom card in a way that your spectators don’t see. Hold the deck face down. Grasp the deck from above with your other hand. Rotate the cards 180° clockwise, moving the inner edge to the outer edge. Do this very casually. As you rotate the deck, look at the bottom card. It will appear as if you are just adjusting the cards in your hands. Nobody will suspect your actions.

Tell them you are going to turn around, and when you do, they should work together and switch the positions of their cards in the deck. Spread the cards face-up on the table. As you say the following directions, look for your key card and remember the card beneath it. This card is the first selection. “Don’t change the position of any other cards, just switch your cards, and after you do that, close up the deck. I’m turning around.”

When they are done, turn back around. Pick up the deck and hold it face up. “You picked a card, and you thought of a card.” As you say the following, spread the cards face-up on the table and remember the card beneath your key card. This is the second selection. “Since you shuffled, the cards are in no specific order or arrangement, so there is no way I could know your cards.” Immediately scoop the cards up and place the deck down.

“Your card is easier because you physically touched it. It is a red card, a diamond, the eight of diamonds. Your card is more difficult because you only thought of it. Concentrate…you did not think of a red card, it is a club, think of your card. Are you thinking of the seven of clubs?”

PRO TIPS: You can do this for one spectator if you want, yet making someone pick two cards is a lot. Since you are spreading the cards on the table as you are giving directions and talking, your spectators will not remember you looking through the deck. Play this up a little bit. A little acting goes a long way.

Hold the deck from above with your right thumb and 2nd at the inner edge. Curl your right 1st naturally on top. From below, you will take small packets off the top with your left thumb and 2nd finger. As you take packets, let them fall into your left hand, which acts as a cradle. Your right hand does all the moving. You can take off as many packets as you want. I recommend 4 or 5, which legitimately shuffles the cards. Place the remainder on top.

CENTER HINDU SHUFFLE: Instead of doing the Hindu shuffle with the whole deck, pick up half the deck and do the shuffle. This leaves your cards on the bottom untouched. This is a great move and we will use it here.

PRO TIPS: Put in the time now to learn this shuffle. Spend an hour or two practicing while you watch tv. Go slow and get comfortable with the shuffling action.

EFFECT: Spectator is holding a packet of 10 cards. They choose a random number, and you make that many cards appear in their pile.

Turn the bottom three cards of the packet face down. The best way to do this is to turn around for one second so your spectators can’t see you, and just do it. The trick hasn’t started, nobody is looking. Do it casually.

Hold the face-up packet of cards squared in your hand, so the bottom face-down cards don’t flash. Take the first card, flip it face down, and place it underneath, as you count, “one.” Do this two more times, “two, three.” Hand the packet to your spectator and have them finish the count. They will count ten cards. Have them hold onto the packet.

Pick up the deck and give a quick shuffle keeping the top card in place. A riffle shuffle works well here.

You need a brief time delay drawing their attention away from the cards. Look up for a second and tell your spectators that they have ten cards, and whatever number they cut to you will make that many cards appear in their pile. Bring their attention back to the cards, lift off the top angled packet, and turn over the top card, which is a three. “You cut to a three, so I will magically make three cards appear in your packet.”

I like to do one throwing motion with my hand as if I am invisibly tossing cards toward them. You can pick up the deck and riffle the cards in their direction, whatever you want. There has to be a moment where you seemingly make the cards appear. Have your spectator count the packet of cards. They will count 13.

I have seen this done where the magician repeats the trick and adds another three cards to the 13 cards after they are counted. This is unnecessary and anti-climactic. You already performed a miracle, doing it again is overkill.

Though it is good to have your spectator count the cards in the beginning, it is ok if you count all 10 and then hand the packet to your spectator.

When you hand the packet to your spectator, don’t make a big deal of it. Tell them to hang onto the cards. They don’t have to place it on top of their hand and place their other hand on top. That is too much, in my opinion.

EFFECT: A card is randomly picked and lost into the deck. It seems impossible yet you find your spectator’s card.

Separate the deck into red and black cards. Your spectators will not suspect any setup. As a convincer, do a center Hindu shuffle- lift up cards in the top half of the deck and Hindu shuffle them (see Hindu shuffle details above).

Very quickly spread the cards toward you and site their card. It is easy to see; the card will stand out. Square up the deck and shuffle it. At this point, you are clean; there is no evidence of a setup.

CARD CHANGES IN THEIR HAND: The cards are on the table and their card is somewhere in the middle. You have no control of the cards, this is a very strong moment. Tell your spectator to concentrate on their card. Pick up the deck and hold it so the faces are toward you. Run through and find their card. Take it out without them seeing it.

Have your spectator place out their hand palm up. You are going to do a miscall. Let’s say their card is the 3 of Hearts. Hold up the card and say, “Your card was the 7 of Spades?” Place the card on their hand. They will say no. Act as if you messed up. Then act as if you have an idea. Wave your hand over the card and have them turn it over. It seems as if you changed the wrong card into their card.

To learn another incredible ending for this trick check out Card Tricks for Beginners – Step-by-Step Instructions.

EFFECT: Cards are shuffled. Your spectator cuts the deck into 4 piles and deals cards in a random way. The top cards of each pile end up being the 4 aces.

Start with the 4 aces on top of the deck. Shuffle keeping the aces on top. I recommend a riffle shuffle.

Place the deck on the table at position 1. You will give instructions to your spectator. They will cut the deck into four piles.

You will show your spectator what they will do. Pick up pile 1. Take three cards off the top and place them on the bottom of the packet. Deal one card on top of the other piles. Place the packet back down.

Point to pile 2. Give these instructions to your spectator:

Go slow with your instructions. Always remember, if your spectator screws up, it is the magician’s fault, never the spectator’s fault.

Check out this Free Video and learn my favorite 4 Ace Trick. It is easy to do and guaranteed to amaze. I perform it all the time at my paid events.

How to Do a Card Trick – Step by Step Detail 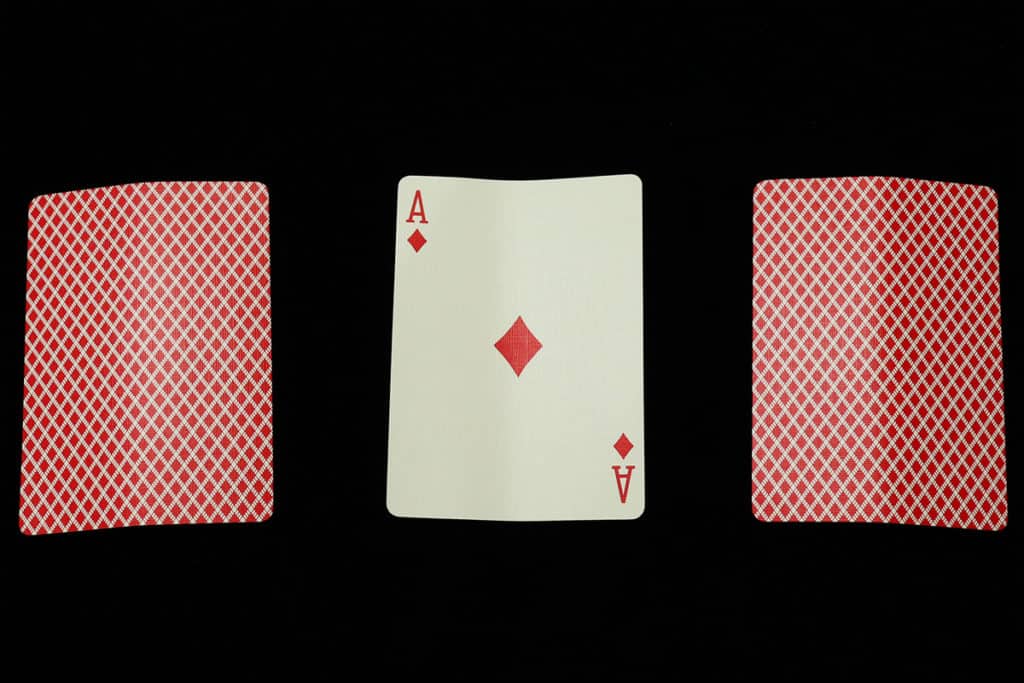 Card Forces You Will Use – Plus Tricks To Go With